Home
>
Places
>
Top-9 Things to Do in Times Square
The following two tabs change content below. 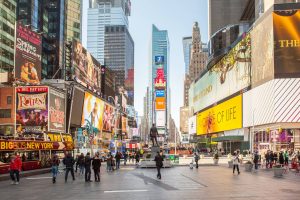 Times Square is called the crossroad of the world. This famous square is one of the liveliest pedestrian area: during the year, up to 39 million people (both New Yorkers and tourists) pass through it. During the day there are about 300 thousand fans of city noise, skyscrapers and bright lights. Due to these advertising lights, the area, where the Times Square is located, has been called the Great White Way for more than a century. And once there was a countryside, there was a manor where horses were bred. In the XIX century, the city quickly spread to the north, and in 1872 the area that was formed between Broadway and Seventh Avenue was named Long-Acre-Square. Its current name was given to the square in 1904, after the New York Times moved to the new skyscraper on 42nd Street. Three weeks later, the first electric advertisement appeared on the corner of 46th Street and Broadway. Times Square quickly became the center of New York – on it and around a lot of theaters, music halls, high-class hotels, restaurants appeared.

Thing to do number 1: Visit the Madame Tussauds Museum 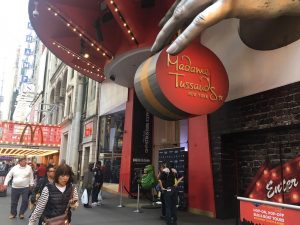 The Madame Tussauds wax museum has a beautiful New York branch in the heart of Manhattan. The museum was opened in October 2000 and up to this day it enjoys the greatest popularity. The museum occupies 10 floors of the building in Times Square on 42th street between 7 and 8 Avenue.

In the Madame Tussauds wax museum in New York, you will see more than 400 celebrity sculptures that look like alive. Among the exhibits there are mainly American celebrities but there are also European. There are no fences in the museum, so you can approach each figure and take a picture. For example, you can put your head on John Travolta’s shoulder or gently kiss Marilyn Monroe. The only exhibit of the museum that is stored behind the glass is the figure of Adolf Hitler after the case when the visitor tried to tear off the sculpture head.

Among the celebrities in the museum of wax figures in New York there are both presidents and politicians, among whom Golda Meir and Yasser Arafat are peacefully standing side by side. Also in the museum there is the figure of Madame Tussauds herself in a modest black dress. All the figures for this museum are made in England and are transported to New York by special transport.

Interesting: Tickets to the Madame Tussauds wax museum are nowhere cheap. New York is no exception. The price for an adult ticket is $ 36. For pensioners and children – about $ 30. 8% city tax is additionally paid. Despite the price, which never declines by more than 15%, a rare tourist will say that he spent this money in vain. Vivid impressions are guaranteed!
Back

Thing to do number 2: Go for a walk to the Central Park 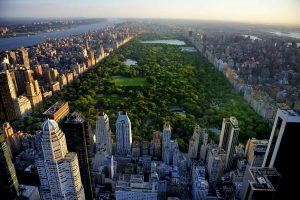 In the New York area of Manhattan, urban life is very active, never ceasing for a minute, and a bright contrast with the usual environment of the metropolis creates a park silence and greenery.

The seal of rest and relax was designed in the 19th century; in those days, New York was growing every year, and its authorities seriously thought about creating a recreation area for workers who did not have enough money to often leave the city limits. Work on moving enough of the soil to the center of Manhattan and growing green plantations was conducted almost twenty years, and the result was the emergence of one of the most famous city parks in the world.

On the territory of the Central Park you will find:

In the garden of Shakespeare, the flowers and plants mentioned in the plays of the great playwright grow, and free Shakespearean plays are performed nearby. In the castle Belvedere there is an observatory. On the Great Lawn in summer there are numerous concerts.

Interesting: New Yorkers visit the Central Park with families. Wander between the enclosures with animals, leave coins in the waters of the Turtle Pond and, finally, just lie on the emerald-green grass of the Sheep Meadow – doesn’t this sound like the best way to take the breath away from the bustle of the metropolis? Sure, yes. If you are looking for the quite relaxing place.
Back

Thing to do number 3: Look at the Empire State Building 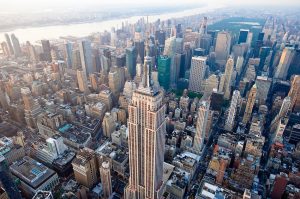 Perhaps in every city there are places that are some sort of identification beacons, according to which this city will be recognized even by one who has never been in it. In the largest city of the United States of America, New York, one of such beacons is the world famous Empire State Building – the tallest building in the city.

It is possible to talk much about the Empire State Building:

It should be noted that in this skyscraper, regular sports competitions are held on the run (the world record of overcoming 1576 steps, numbering from the first to the eighty sixth floor, is 9 minutes 33 seconds) and training among firefighters and policemen.

It’s possible to talk about the Empire State Building, the legend of New York, for a long time, but it’s better to see both the tower and the city with your own eyes, in which observation platforms located on the 86th and 102nd floors will help. With these convenient and practical, like the skyscraper itself, the observation areas you will see a magnificent view of the city, especially the beautiful night, when New York is shimmering with the inflorescences of the lights of all colors of the rainbow.

Interesting: To miss such a spectacle being in New York is a big mistake, because the observation grounds on the Empire State Building are part of the general legend of this building, and it is not right to visit a living legend. In a word, New York, seen from a bird’s eye view, is waiting for you!
Back

Thing to do number 4: Enjoy shopping and visit museums at the 5th Ave 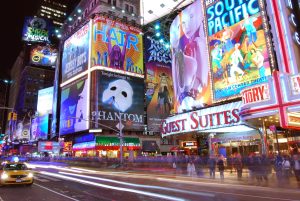 The 5th Ave is one of the most expensive and famous streets in the world, located in the heart of Manhattan. The street crosses Manhattan from Washington Square Park to Greenwich Village, runs along the eastern border of Central Park to 142nd Street near the Harlem River. There are countless expensive and exclusive boutiques on it.

The Fifth Avenue section, running from 82nd to 105th Street, is often referred to as the Museum Mile, as it houses ten museums. Among them there are:

However, museums on Fifth Avenue are not only in the area of this very mile – for example, in this famous street there is the Museum of Sex.

Interesting: The Fifth Avenue is also a geographical landmark: it divides Manhattan into the western and eastern parts and is the starting point for the numbering of houses for Manhattan streets.
Back

Thing to do number 5: Visit the Rockefeller Center 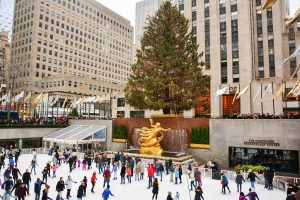 This is a kind of a city in the central part of Manhattan, a harmonious and complete business center, where people go not only to work, but also to rest. There is everything:

The center was built on the initiative and on the money of John D. Rockefeller. It cost him $ 125 million – a huge sum for that period of time.

Thing to do number 6: Go to the Theater District 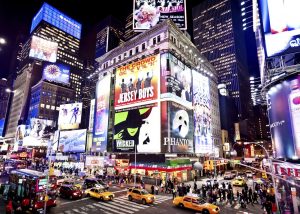 At the end of the 20th century, the Broadway theater life revived sharply. It turned out that investing money in theater performances can be very profitable. Theaters were built and rebuilt, trying to outdo each other with:

World-class actors were invited to perform at their stages. In the 1900s, the city authorities decided to demolish outdated buildings in the area of the present Times Square. On the vacant site as the mushrooms grew theaters.

Because of the incredibly bright light of the neon signs, this part of Broadway received the nickname of the Great White Way. In addition to fashion plays, theaters tried to tempt viewers with new musical entertainments, that’s when the first musicals appeared. The first Broadway “musicals” were, in fact, just bright vaudevilles, completely devoid of drama. However, the performances on the avenue are not only musical; on quite a number of theatrical stages there are also quite serious dramatic performances – from Shakespeare to Chekhov.

With the huge lights and billboards, the names of popular musicals and the names of mega stars scream. The audience gathers closer to eight in the evening in Times Square. The sold-out here is the norm, although the average price for Broadway tickets is about one hundred dollars.

Interesting: There is one small nondescript glass box on the northern circle of Times Square, where approximately half a day before the play, they “throw out” the unsold “reservation” for half the price. A lot of people come to the area in search of entertainment, and even the choosiest theater lover will easily find here something to his taste.
Back

Thing to do number 7: Enjoy performances on Broadway 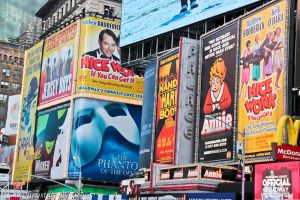 Broadway is a bright and very famous street. Today Broadway is associated with theaters and musicals. This is not surprising, since in the area from 43 to 50 streets, these establishments are really huge. Every day you can watch crowds wanting to see the most interesting performances, such as:

42 Street at the intersection with Broadway is the most visited territory in New York. This site is so popular that the owners of theaters on 41 and 43 streets made special passes to point 42nd street.

It is on Broadway today that the main theaters of the world are in such numbers that it is sometimes difficult to make a choice in favor of a particular performance. In each building, only one performance is played here from year to year.

Interesting: In the 20-30s of the last century, Broadway hosted more than 80 theaters. Today there are fewer, but there is no a tourist on Broadway who may think that there is a lack of theaters in New York.
Back

Thing to do number 8: Look at the symbol of NY-the Flatiron Building 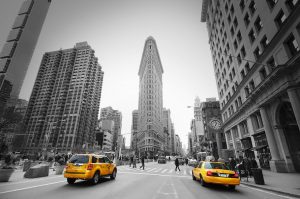 The Flatiron building today is an office building, but it is a symbolic symbol of New York.

From the height it is clearly visible that the house-iron forms an angle of 25 degrees.

The Flatiron Building has an interesting point in history: at the beginning of the 20th

century it was very popular with men. The thing is that the peculiarity of the location of the building gave rise to strong ascending streams of air, so that the skirts of women passing by always rose. This attracted the attention of all passers-by.

Interesting: Skyscraper of the Flatiron Building was mentioned in O’Henry’s story “Peaches” and in Stephen King’s book “How to Write Books”. A photo against the backdrop of a New York home is an important proof of visiting the world’s largest metropolis.
Back

Thing to do number 9: Enjoy art at the Museum Mile 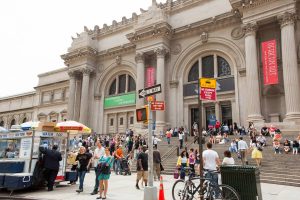 The museum mile is a part of the 5th Avenue in New York – a great place for fans and connoisseurs of art of different directions. In this place a large number of museums and galleries of the city is concentrated. The Museum Mile takes its origin from the building of the Frick Museum of Fine Arts, built in the style of the 18th century French palaces.

More than a dozen of the “art houses” are located on the green street:

Interesting: Every Tuesday, all the museums, starting in 1976, arrange an open day.
Back