Home
>
Places
>
Top-15 Most Amazing Things to Do in Phoenix Today
The following two tabs change content below. 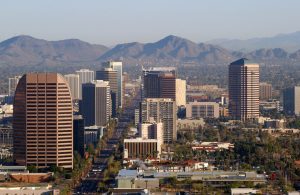 People come to Phoenix for excursions in deserted surroundings, for the sake of reserves dedicated to Indian culture, for the sake of numerous museums and archaeological parks. When it comes to tourism in the metropolis, built just over a hundred years ago, many guests do not quite understand what to do there. It’s not the ancient city of Europe or, for example, the Pacific islands with an original culture.

And, of course, they are mistaken as there are a lot of interesting things to in Phoenix. Flora and fauna of the Sonora desert require a separate study of those who are interested in nature. In the Botanical Garden of Phoenix you can find out how desert plants have helped survive its inhabitants. If you are more interested in modern life, there is an art museum, where you can see the works of artists of Latin and North America, Asia. Find out more about things to do in Phoenix today making the virtual trip there now.

Thing to do number 1: Look at the exhibits displayed in the Heard Museum 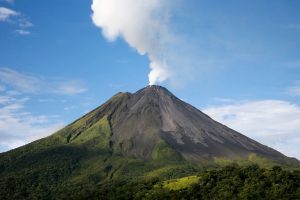 Heard Museum is a museum of art and indigenous sculptures, which is dedicated to the ethnography and heritage of the cultures of the Indians of America.

The museum was founded by Mary Bartlett Heard and Dwight B. Heard in 1929 for a personal collection of art. A large number of exhibits went to the museum after excavations of the ruins of La Ciudad.

Now in the collection of the Museum of Heard there are more than 40 thousand exhibits and more than 34 thousand volumes of the archive and library. The area of the museum is 12,000 square meters. There are a classroom, a gallery, and a playground for performances.

Visitors to the museum will get acquainted with:

Interesting: Each year in November, the Spanish Fair is held here, in February – the international contest of Indian hoop dance, and in the spring – there is the Indian Fair.
Back

Thing to do number 2: Enjoy attractions of the Encanto Park 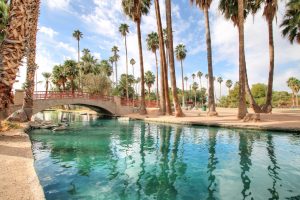 Encanto Park is a US state park located in the center of Phoenix. Its territory has an area of 222 acres. The park is a popular place for:

Encanto Park also offers canoeing and kayaking, fishing (Soma, trout, carp and perch live here) or watch ducks and other waterfowl. It has tennis and basketball courts, a swimming pool, an amphitheater, lagoons, a children’s playground with a lot of attractions and more.

Interesting: Encanto Park is one of the brightest attractions of the state, which is best visited by the family.
Back

Thing to do number 3: Visit the US Airways Center 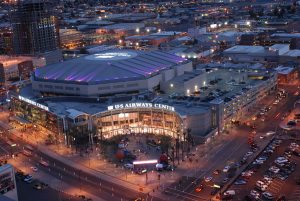 The US Airways Center is also known as America West Arena. It is a multifunctional sports complex. It was opened in 1992 and is the home arena for the basketball team “Phoenix Suns”.

The construction of the arena lasted 2 years, it was initiated by the leadership of the club. The cost of construction was $ 90 million. This large complex can accommodate more than 19 thousand fans.

In addition to basketball matches, the arena hosts many other competitions:

Also in the arena there are social events and music concerts.

Interesting: At the US Airways Center, celebrities such as Frank Sinatra, Madonna, Beyonce and others sang at different times.
Back

Thing to do number 4: Go shopping to the Biltmore Fashion Park 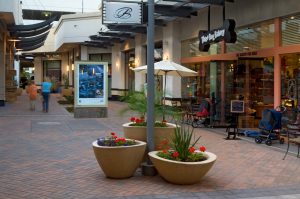 The shopping center was opened in 1963 at a place that was once considered the “outskirts” of the city. It is named after the Arizona Biltmore hotel, which is one of Phoenix’s 33 pride items (monuments and attractions within the city that represent the best of the best for guests and permanent residents).

Here you will find such brand shops as:

Interesting: There are more than 75 shops, restaurants, cafes.
Back

Thing to do number 5: Entertain yourself in the Castles N’ Coasters Park 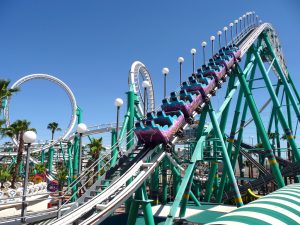 Castles and Coasters park is an amusement park and a family entertainment center located in Phoenix, Arizona, USA.

The park was opened in 1980. In total, there are 14 types of attractions, including 2 roller coasters and 2 water attractions. The park occupies 40 thousand square meters.

Here you will find an open area for:

Interesting: This fun and thrill park is the perfect place for the whole family. Besides the mentioned attractions, here you can visit the 3 D theatre and enjoy 7-Dimensional adventure called X Dark Ride.
Back

Thing to do number 6: Look at the Tovrea Castle 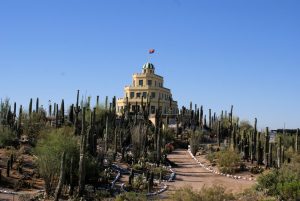 Tovrea Castle is a historical building and landmark located in the city of Phoenix, Arizona, USA.

The castle building itself received the nickname “wedding cake” because it reminds the traditional wedding cake.

Interesting: Tovrea is one of Phoenix’s 33 pride items (monuments and sights within the city that represent the best of the best for guests and permanent residents).
Back

Thing to do number 7: Go to the Symphony Hall 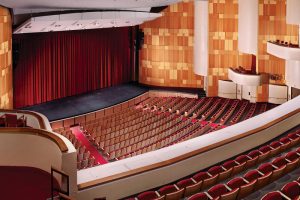 The Symphony Hall is a multipurpose room for performing arts, located in the city of Phoenix, Arizona, USA.

Here you will be able to watch:

Interesting: The Symphonic Hall is home to the major American symphony orchestra “Phoenix Symphony”, as well as for ballet and opera.
Back

Thing to do number 8: Visit the Phoenix Musical Instruments Museum 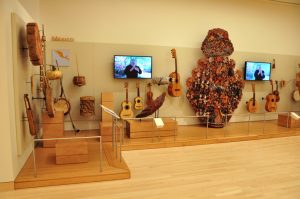 The Phoenix Musical Instruments Museum was opened in April 2010.

The museum collection consists of more than 15 thousand musical instruments, as well as related items, which represent the musical art of about 200 countries.

Visitors of the museum can find the following things here:

Interesting: The Phoenix Musical Instruments Museum is the largest museum of instruments in the world.
Back

Thing to do number 9: Learn more in the Arizona Science Center 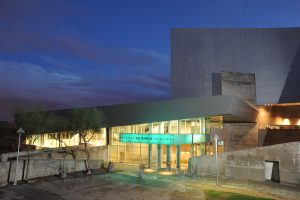 The Arizona Science Center specializes in educating people interested in science. It is located in the heart of downtown of Phoenix. It was founded in 1980 as an experimental research center.

Annually it is visited by about 400 thousand visitors from different corners of the planet.

The Science Center of Arizona hosts:

Interesting: The exposition of the center contains more than 350 practical exhibits.
Back

Thing to do number 10: Get acquainted with flora and fauna in the Phoenix Zoo 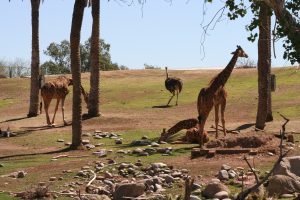 The Phoenix Zoo was opened in 1962. It is the largest state zoo in the United States. It is located on an area of 51 hectares in the Papago Park and has about 1,300 animals that live in four zones, and more than 4 km of routes for walking.

The zoo consists of four main trails or sectors. Visitors can get acquainted with:

From the very first moment of its creation until now, this project was the embodiment of human love for the pristine nature, for its beauty and perfection. The founders of the zoo wanted not only to preserve the rapidly disappearing species of plants and animals in the wild, but also to reproduce them for the purpose of subsequent introduction into a permanent, in the near past, habitat.

Interesting: As part of the Oryx project, they managed to preserve and return to the wild nature a whole herd that had been considered until recently disappeared, the pox and the population of other animal species that are on the verge of extinction in the wild.
Back

Thing to do number 11: Go to the Wesley Bolin Memorial Plaza 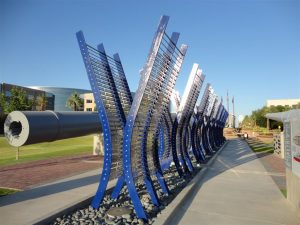 Wesley Bolin Memorial Plaza is a city park that is located in the city of Phoenix. On its territory, you will find:

Wesley Bolin Memorial Plaza was established in March 1978 by the Arizona Legislature and was dedicated to Governor Wesley Bolin.

The most famous monuments are devoted to:

Thing to do number 12: Visit the Phoenix Art Museum 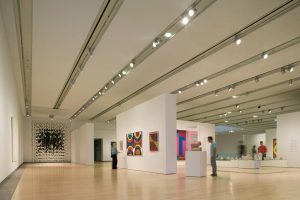 The Phoenix Art Museum is the largest art museum of visual art, located in the southeastern United States.

In the Art Museum of the Phoenix you will definitely like:

In its exposition there are more than 18 thousand works of American, European, Asian, Latin American, Western American artists, as well as modern art and clothing design.

Thing to do number 13: Go to the house-museum the Rosson House Museum 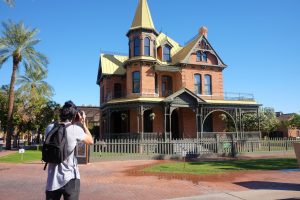 The Rosson House Museum was built in 1892-1895 in Phoenix and has still retained its original appearance. It was named after Dr. Roland Rosson Lee and his wife.

The house-museum of Rosson is built in the style of Victorian architecture, which displays many attributes of different cultures:

Burning brick and wood were used in the construction of the structure.

At present, the Rosson building is an historic museum house. In 10 of its rooms there are excursions and celebrations.

Interesting: There is also a gift shop where you can buy souvenirs reminding of this place.
Back

Thing to do number 14: Have fun in the Water Park Wet’n’Wild 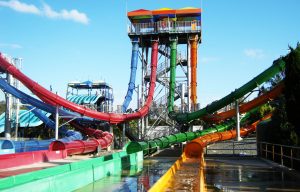 This is the most unique and fantastic man-made miracle in Phoenix. It is located in a sultry desert and is a favorite place of entertainment and recreation for the people of the state.

Here you will find:

One of the most interesting and breathtaking attractions is called “Tornado”. A huge stream of water is fed through a special pipe into a huge funnel. At this time, the visitor in the rubber inflatable mattress with wide and high edges tries to come down. Under the pressure of the water, the mattress starts spinning furiously along the wall, inexorably approaching the edge of the funnel. This spectacle is somewhat like a vertical race on motorcycles, with the only difference being that motorcycles always tend to go up, and mattresses rush to go down.

The children’s waterslides and numerous water attractions are an invariable success for holidaymakers. They are especially attractive after five in the evening.

Interesting: Water Park Wet’n’Wild Phoenix is the biggest gift to the inhabitants of the desert in the hot days of the southern summer. Both adults and children will have an unforgettable, simply stunning impressions.
Back

Thing to do number 15: Learn more about Chinese culture in the Cultural Center Cofco 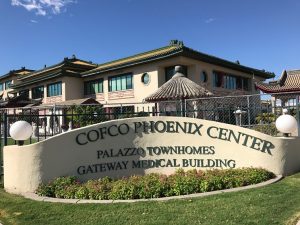 Chinese Cultural Center Cofco was established in 1997 on the initiative of the People’s Republic of China. There are numerous monuments of architecture and culture of China, which visitors can get to know.

Countless tourists are attracted to the Chinese Center by the exotic culture and architecture of China:

In the cultural center of Cofco there is a celebration of the Chinese New Year on the lunar calendar and the autumn festival of the moon. Numerous participants and guests of these celebrations like to wander around Chinese grocery stores and markets. They are attracted to tons of amazing Asian products, which nowhere else in the US are no longer found.

Interesting: Don’t miss a chance to visit herbal stores, where visitors can smell and buy earthy tea and a variety of herbs gathered in the highlands of China.
Back