Home
>
Places
>
Top-13 Things to Do in Las Vegas with Kids
The following two tabs change content below. 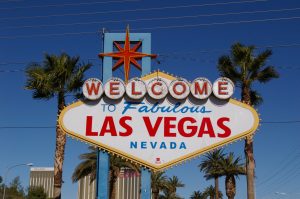 Going to Las Vegas with children at first glance may seem a strange idea. However, Vegas has something to offer to family travelers and what to do for small tourists. While parents will visit unique hotels in different styles and watch interesting sights, their children will no longer be bored. Interactive and cognitive museums, roller coasters, amusement parks and aquariums with marine life and dolphins, live volcanoes, circus performances, a whole complex of trampolines, water parks – all this is in Las Vegas.

Thing to do number 1: Go to the Las Vegas Zoo 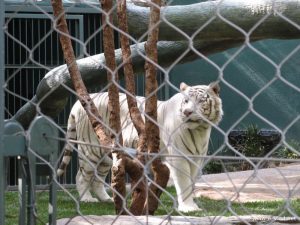 The southern zoological and botanical park of Nevada, better known as the Las Vegas Zoo, is located 15 minutes from the city center. The area of the zoo is 1.2 hectares.

The zoo focuses on the protection of the nature of the desert and the natural habitat of some representatives of the animal world. The mission of the zoo is to educate and entertain visitors, showing them a variety of animals and rare plants. Surprisingly, there are no fees for viewing natural beauties, and the only place where visitors can part with their money is an exhibition of precious stones and a small souvenir shop located at the exit of the park.

The park boasts more than 150 species of animals and plants, including the only family of Barbari monkeys living in the US. Also here you can see:

Interesting: Among plants, bamboo is the most diverse.
Back

Thing to do number 2: Visit the Museum of Natural History in Las Vegas 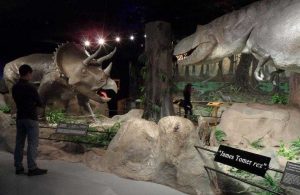 For kids it will be interesting to visit the Museum of Natural History in Las Vegas. Here there are exhibits of all kinds of wildlife animals. They look so believable that the atmosphere of the zoo is created.

In various halls of the museum there are various animals:

To hear the sounds that are produced by animals, just press the special buttons. Also in the museum there is its own swimming pool with live sharks and rays.

In the prehistoric gallery of the museum you can read about dinosaurs, their lives, and also see the huge exhibits of these animals. They are as close to reality as possible, and their size will impress everyone, because the teeth of some representatives of this species reached a length of almost 20 centimeters.

Interesting: The dim lighting and the dreadfulness of figures of dinosaurs will add realism and impressions.
Back

Thing to do number 3: Go to the Cactus Garden 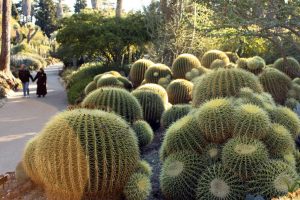 The cactus garden, called Ethel-M, occupies an area of only 1.2 hectares, and is a popular vacation spot and walks, both among locals and tourists. This place is located in the territory of the chocolate factory.

Here, with the help of bacteria, snails, fish and algae, the sewage treatment of the factory takes place in order to completely clear all of the excess chemicals. Then this water comes back to water the gardens. Ponds that create on the territory of the botanical garden attract the attention of different birds.

Annually in the beautiful garden there are several events. Particularly interesting is a holiday, during which a light show takes place among cacti. The action is free and accessible to the general public.

This collection of flora is one of the most extensive in the US. In this wonderful place you can find:

Interesting: The garden is striking in its variety – 350 species of cacti grow here.
Back

Thing to do number 4: See the Broadway musical “The Lion King” 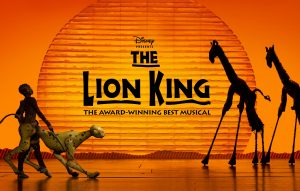 “The Lion King” – giraffes, lions and lots of other animals, jumps, torches, loud music on the scenes of the street in Las Vegas. By the way, Timon and Pumba are here too. The show is produced by Disney Theatrical.

“The Lion King” is a Broadway musical based on a sentimental cartoon about the great power of love and the thirst for power that has grown fond of millions of spectators and producers. The story of a lion cub Simba, his friends and foes is the eighth longest show in the Broadway story.

A great play of actors and witty special effects in a moment take the audience to Africa, where they:

Interesting: The performance has won numerous awards, including the Tony Award and the New York Society of Theater Critics award in the category “Best Musical”, the Grammy Award for “Best Album – Record of the Musical”, and many other awards and awards for costumes and design.
Back

Thing to do number 5: Watch the Show Fremont Experience 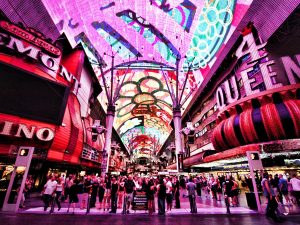 There is a unique show on Fremont Street in the lower part of Las Vegas. Above the street there is a huge dome 27 meters high and 460 meters long. Over 12 million LED displays are attached to the dome, to which the image is broadcast. Fragments from all displays add up to one giant picture.

Performances begin in the evening and go every hour. Tourists can see six different shows. One of them, the most popular, is called “Drop”. This show begins with a drop of water, which gradually turns into:

And then it becomes a small drop again.

Interesting: Under the dome there are also shops, souvenir shops, cafes and restaurants where it is possible to go have a dinner and buy some souvenir.
Back

Thing to do number 6: Visit the Acacia Garden 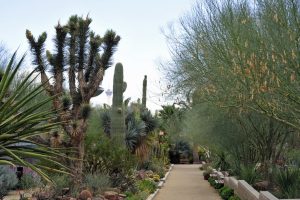 The acacia garden, located in the public park of Henderson, Nevada, is an example of how natural landscapes can exist in an arid desert climate.

The territory of the garden is divided into several sections, namely:

Interesting: In this wonderful place many kinds of plants are collected, which can surprise imagination and make you think about the preservation of nature.
Back

Thing to do number 7: Have a look at Fountains of Bellagio 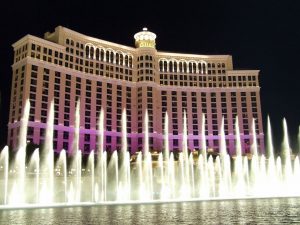 Fountains of Bellagio – the world famous musical fountains, located near the eponymous hotel-casino, close to the main street of the city. Bellagio fountains are recognized as one of the most famous city attractions and are a recognizable symbol of Las Vegas.

Fountains are located in the so-called Lake Como – an artificial reservoir measuring 3.2 hectares in front of the Bellagio casino. The jets of water in these fountains are synchronized with the music, and several times an hour the show starts, which always causes delight among tourists both adults and children. The spectacle and the truth are unusually beautiful:

To look at the dancing jets of the Bellagio fountains the mass of the people regularly gathers – this is one of the most popular places in Las Vegas. Water extravaganza is visible from afar.

Interesting: The scale of the performance and the extraordinary beauty of the show turned the fountains not only into local decoration of the city, but also into an international landmark.
Back

Thing to do number 8: Go to the Conservatory and Botanical Garden of Bellagio 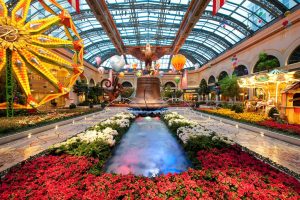 The Conservatory and Botanical Garden of Bellagio hosts more than 5 million visitors annually, who come here to see the real flower extravaganza.

In the conservatory there are:

The uniqueness of the attraction is that its authors change expositions every year, so that all visitors are interested. For seven days, 120 employees are working 24 hours a day to transform the 13,573-square-foot conservatory. In this place, there are more than 10 000 indoor flowers and plants brought from Southern California. Watering the flowers is mostly done manually. Special floodlights illuminate each flower, emphasizing its features.

Interesting: In the gardens daily live musical performances are arranged.
Back

Thing to do number 9: Watch the Show “O” at Bellagio 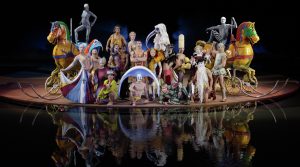 Show “O” is a unique stage performance from the famous circus Du Soleil, which can be seen exclusively in Las Vegas, at the Bellagio.

Show “O” has been successfully demonstrated in Las Vegas since 1998, and its popularity is so high that it is extremely difficult to find tickets. The uniqueness of this show is further strengthened by the fact that the circus cannot tour – the production is so complex that it requires a specially prepared stage and

sophisticated equipment. Thus, the show “O” for 15 years has remained the exclusive of Las Vegas.

The performance itself is incredibly beautiful, the scene is a huge aquarium, in which the action unfolds:

Interesting: And although the price of tickets starts from a hundred dollars, all seats in the hall are sold long before the show starts.
Back

Thing to do number 10: Go to the Town Square 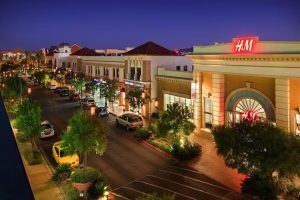 The shopping and entertainment center of Town Square covers an area of 140,000 sq. m., which are shopping centers and offices. In 2005, construction began, which was designed by two architects: Alan J. Maher and Marnell Corrao. The complex was opened on November 14, 2007.

Tourists with children can enjoy the following activities:

Interesting: Once you get here, you can leave kids at the playground and visit such famous stores as Apple, J.Crew, H & M, Martin + Osa, Guitar Center, Robb & Stucky Interiors, Abercrombie & Fitch and Sephora.
Back

Thing to do number 11: Have Fun in the Amusement Parks of Las Vegas 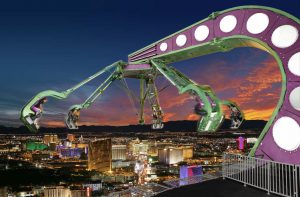 There are several theme parks and amusement parks for children, where any child will be able to have good time and parents will be happy to see how their children have fun. They are the following:

Interesting: The roller coaster of Las Vegas rank third among all of its American counterparts. Their speed sometimes reaches 130 km per hour.
Back

Thing do number 12: Get some souvenir at the famous gift shops: Bonanza store and Grand Canyon Experience 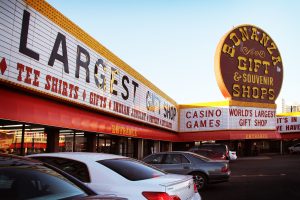 The largest gift store in the world is the Bonanza store. It is located in Las Vegas, and is one of its attractions. It’s impossible not to notice because the dimensions of the store are simply amazing.

The store is marked by a large round sign, and next to it a cowboy stands and announces the store’s novelties.

Why this place is one of the must destinations?

One more souvenir shop that is worth visiting is Grand Canyon Experience – one of the most famous souvenir shops in Las Vegas, which enjoys great popularity among tourists. The Grand Canyon Experience is part of the Showcase Mall. The store has its own entrance, which is decorated with a huge neon sign, so it’s hard not to notice even despite dozens of screens and advertising banners nearby.

Interesting: The building of Bonanza store glows with a dazzling neon light, so, since 1980, after its discovery, almost no one can pass by it.
Back

Thing to do number 13: Visit the Nevada Railway Museum 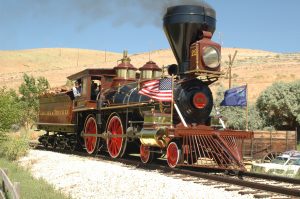 Boys will definitely like the Nevada Railway Museum that has retained a railway heritage throughout the state. Many exhibits, including locomotives and wagons, were bought from various Hollywood studios. Such things are worth the weight of gold, because they were involved in popular films. A total of 65 wagons and locomotives are represented here, some of which were built before 1900.

When you get to the museum, you immediately feel yourself in the old days, when the railway just started functioning. Here you can:

Interesting: The museum holds seminars on the history of the railway, lectures and presents the equipment that is necessary for the proper functioning of the entire railway.
Back