Home
>
Places
>
Top-11 Grandiose Things to Do in St. Louis This Weekend
The following two tabs change content below. 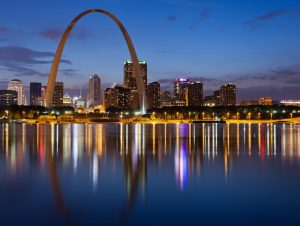 St. Louis is a city that is located in the Midwest of the United States in Missouri. The location of this city is the west bank of the Mississippi River, and this is slightly to the south of the area where the Missouri flows into this river. The city of St. Louis was named after the French King Louis IX. This ruler was called as Saint Louis. 1803 was known for such an event as the purchase by the United States of America from the French state of the vast possessions of Louisiana. Do not confuse St. Louis with St. Louis County. Despite the same name, the city of St. Louis is not a part of the county.

Nowadays St. Louis offers a lot of interesting things to do. Among the tourists water walks on the old ships with the names of the characters of Mark Twain are very popular. Or you can just sit in the ship-restaurant and admire the great river. Romantics should take a ride in the center of St. Louis in a carriage, and fans of extreme sports board would like an aerial excursion. Those who aren’t afraid of flights can enjoy the 20 minutes flight by helicopter over the city. If you plan to spend your weekend here, then don’t pass by this article. Learn more about the great things to do in St. Louis this weekend. 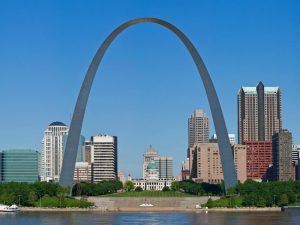 Thing to do number 1: Enjoy the great view of the city from the deck of the Gateway Arch

A visiting card of the city is the arch in St. Louis. Sometimes it is called ” the Gateway to the West”, which appeared in 1965 and is located in Jefferson National Expansion Memorial. It is a structure in the form of an arch, which is 192 meters high.

At the top of the arch there is an observation deck with a breathtaking view of the local surroundings:

The range of visibility can reach up to 48 kilometers in good weather. To get to the site in just 4 minutes you can use special elevators. Also, it should be added that the shape of the arch slightly resembles the logo of the company McDonalds, as it was built by the very same company MacDonald Construction Co.

Interesting: It is worth noting that this is the highest monument in the US.

Thing to do number 2: Look at the Cathedral Basilica of St. Louis 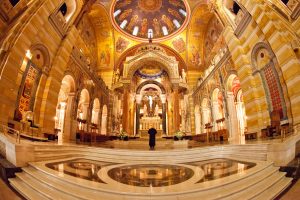 The Cathedral of Saint-Louis, also known as the Cathedral Basilica of Saint Louis or the New Cathedral, was built in 1914 in St. Louis, Missouri, to replace the Old St. Louis Cathedral, the King of France. Basilica impresses with its huge size and beauty of various mosaics in the Byzantine style.

Although the workers began to clear the land for construction on May 1, 1907, the opening of the Council to its first mass took place only on October 18, 1914, when it was finally completed.  The cathedral is famous for its:

Interesting: The consecration of the church took place more than a decade later – June 29, 1926.
Back

Thing to do number 3: Have a walk in the beautiful Forest Park 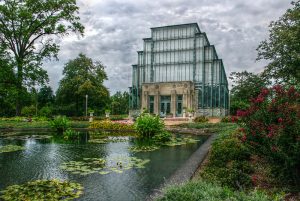 In the center of the city there is a beautiful park Forest, in which everything has been competently designed: foot bridges and routes. This creates the most comfortable conditions not only for jogging, but also makes it possible to enjoy the surrounding nature. Forest Park is a large park area in the heart of the St. Louis city, which, in particular, hosted the world exhibition in 1904. The beautiful and well-kept park is interesting in itself, but in addition to its beauty in the park there are a lot of places to visit:

Interesting: In the Forest Park you can also visit the McDonnell Planetarium.

Thing to do number 4: Watch sports games at the large baseball stadiums 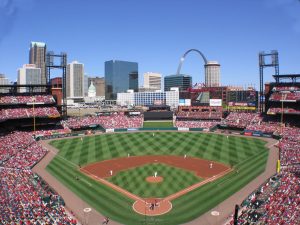 Do you admire baseball? Then St. Louis is the right place to go to. You can spend a great weekend with friends visiting the baseball game. All sports competitions take place in three major arenas:

Choose any of the above-mentioned places to enjoy the great game as all of them are spacious and modern.

Interesting: It is worth noting that in 1885, in the city one of the first US baseball teams appeared, which made Saint Louis famous across America.

Thing to do number 5: Visit the City Museum 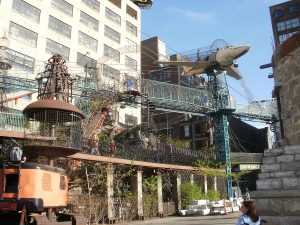 In the heart of the largest city in the US, St. Louis tourists will find the unique City Museum of Entertainment. The Design Museum made a selection of photos of the most interesting places, wishing visitors to see all of them with their own eyes.

City Museum in St. Louis is one of the must places to visit. The architectural structure occupies a significant area, which is based on a 10-story building of the former International Shoe Company. The City Museum is the brainchild of painter and sculptor Bob Cassilli, who bought out industrial premises and after several years of reconstruction opened it for visits in 1997. A lot of structural elements – fittings, metal bridges, construction cranes, pipelines, facing tiles – have been recycled and used. Even the old lace making shop was revived and now produces colorful products for sale.

Despite the fact that the founder of the remarkable project died in 2011, his business is continued by 20 friends and associates, who call themselves the crew of Cassilly.

Here at every step there are wonders:

The City Museum includes an aquarium that not only works as an exhibition, but also as a rehab center where you can see sharks, rays, sea turtles, otters, alligators. If you travel with kids, they will definitely like this place. On the third floor there are circus performances and concerts, which both adults and children will enjoy.

Interesting: If you are planning a trip with children in the US, do not miss the opportunity to visit St. Louis.

Thing to do number 6: Go to the St. Louis Zoo 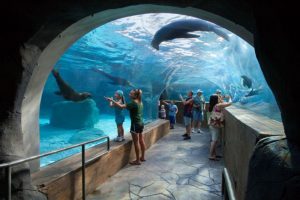 This is a must place to visit for those who spend the weekend in St. Louis with kids, however, their parents will get not less satisfaction from visiting the zoo. St. Louis is known as the leading zoo in the sphere of the research. It has got an accreditation of the Association of the zoos and aquariums.

The zoo is 90 acres. There are about 600 species of animals, among which you will see the endangered species. This zoo is one of the free zoos in the country. Annually the zoo welcomes about 3000000 visitors who can see 15000 wild animals. The zoo is famous for:

Interesting: The entrance is free. The distinctive feature of the zoo is that here you will see the Emerson Zooline, which length is 2 feet with the passenger trains being pulled by Chance Rides C.P. Huntington surrounding the zoo and stopping near the more popular attractions.

Thing to do number 7: Admire the Luxurious Look of the Fox Theater 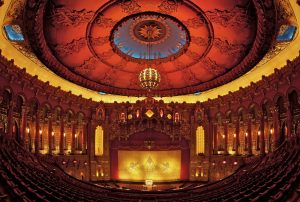 The Fox Theater is considered a precious gem in St.Louis. Located in the heart of downtown, the theater was built in 1929. The pioneer of cinema William Fox in the 1920s built a series of luxury movie theaters Fox Corporation for the company Fox Film Corporation.

Curiously, the Fox Theater became the world’s first cinema, which was built with the view that it will show films with sound and have the appropriate revolutionary equipment. Initially, the Fox Theater was used only to showcase films. The theater flourished for several decades, however, by the 1970s, it had grown noticeably older and worn out. In particular, the balcony lounges were closed. By this time, mostly low-grade films about Kung Fu and horror films began to be shown in it. In 1988, the theater received a second life, when, after the restoration, the building was used for demonstrations of stage productions. Currently, the theater hosts various concerts, shows, performances, classical films.

If to describe the Theater Fox in one word, then the word “Luxury” would suit it the best. The richly decorated interior is made in the oriental style using elements of:

The capacity of the theater is about 5000 seats.

Interesting: The main chandelier of the theater weighs 2 tons. Illumination of a 10-storey building can be seen even a few blocks before the theater itself.  Fox Theater is a stunning attraction, which magnificence is not fully able to convey even the most successful photos.

Thing to do number 8: Plunge into the world of science in the St. Louis Science Center 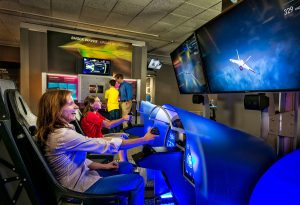 The Science Center is a unique place where you have a lot of things to do:

If you travel with the whole family then visiting this center will be useful for kids as there many interesting educational exhibits. Moreover, almost all of them are interactive. Both adults and children will like the displays. One of the favorite is an animatronic Tyrannosaurus Rex. Kids have a unique possibility to learn and play at the same time using dino-dig, playing in the vet clinic, using the video wall and the radar slide.

Interesting: Here you will find the magnetic ball wall, giant UFO maze, and other things, which can’t be found anywhere else.

Thing to do number 9: Admire art in one of the St. Louis Art Museums 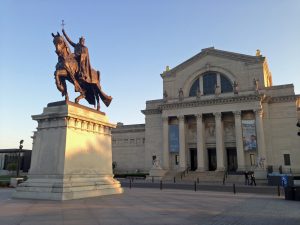 If you like art, then you should find time for visiting the art museum with the sculpture and oil paintings. If you go to the St. Louis Museum you will find the charcoal drawings as well as the photography there.

In St. Louis there are several famous places for those who like spending time closer to the beautiful things. Visit one of the following:

Interesting: In the museums you can see not only contemporary art but also enjoy different educational programs.

Thing to do number 10: Find the best entertainment to your taste in the Lumiere Place 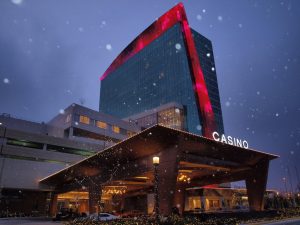 Lumiere Place is one of the most popular places in St. Louis for those who prefer noisy and lively places to visit. This is one of the most visited places because there are a lot of things to do. Many people come here to play casino, which has become the favorite pastime for those who can’t live without risk and adrenaline.  You can play the following popular games here:

Here you can stay in a beautiful hotel and dine in the great restaurant. Giving preference to the hotel here you will be able to visit the fitness and sports center. Pool and spa are also at your disposal. Do you like shopping? Here you will find the best prices and sales for the fashionable and stylish clothes and accessories.

Interesting: The Lumiere Place is full of great things to do if you want to have a rest from everything and relax.

Thing to do number 11: Go to the Wonderful Botanical Garden 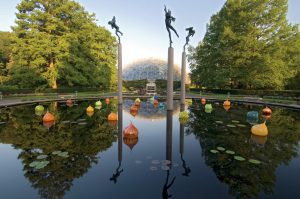 The Missouri Botanical Garden is one of the most amazing gardens, created in 1859 by a wealthy businessman, a native of St. Louis.  The oldest Botanical Garden in the USA is 79 acres. Here you will see beautiful fountains and enjoy the collection of unique rare plants.

The most interesting peculiarities of this garden are the following:

If you come here with children, then they will definitely like the Children’s Garden located at the territory of the Botanical Garden. There are many interactive educational facilities for kids.