Home
>
Places
>
Top-10 Fascinating Things to Do in Jamaica You Will Never Forget
The following two tabs change content below. 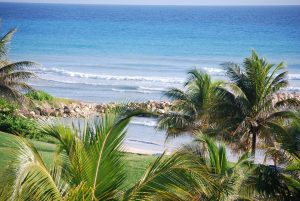 Jamaica is a country of carelessness and unity with nature. It is just incredible here and will surprise any traveler. White beaches and clear water of Jamaica attract vacationers from all parts of the world. Tourism is an important part of the country’s economy, so visitors will not be bored here. You can not lose sight of the city of Jamaica. Among them, there are old and straightforwardly breathing stories about pirates and treasures.

In Kingston, the birthplace of Bob Marley, there is also something to see. Jamaica is a holiday that will not leave anyone indifferent. The nature of the island is magical, and the culture is interesting and diverse. This is a place that everyone should visit at least once in life. Let’s make the virtual tour looking at the things to do in Jamaica now.

Thing to do number 1: Visit the Bob Marley Museum 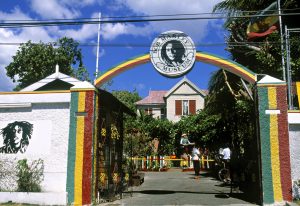 The Bob Marley Museum, founded in 1985 in the singer’s house, is one of the most visited places in Jamaica. Reggae style fans are coming to Kingston from all over the world to commemorate the guru of this style – Bob Marley (the most famous reggae player in the world). What attracts visitors?

The program of organized tours of the house-museum includes a visit to the garden with medicinal herbs, an inspection of the gold and platinum Marley discs hanging on the walls along with Rastafarian paraphernalia, publications about the musician in the press, a visit to Bob’s kitchen he made himself juices) and simply furnished the bedroom with the musician’s favorite star-shaped guitar by the bed, as well as copies of The Wailers Wail’n’Soul music shop in Trenchtown.

In addition, visitors can see Marley’s stage robes, including his famous denim shirt, as well as bullet holes in the wall after the assassination, and a large photo gallery.

Interesting: The tour is completed by a 20-minute film screening of the life of Bob Marley in the studio of Tuff Gong, which has now been turned into an 80-seat cinema. The film is edited from One Love live recordings and interviews.
Back

Thing to do number 2: Admire the View of the Blue Mountains 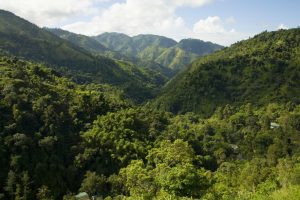 The Blue Mountains are part of a national park founded here in 1992 and considered to be the globally important natural object of the planet. Here, you will see:

Today, the park is under the watchful guard of local authorities that protect park borders. The high slopes of the mountain range are covered with forest, and on the lower ones there are excellent conditions for growing the famous Jamaican blue coffee.

The Blue Mountains consist of two ranges, the highest point of which is the mountain Blue Mountain Peak with a height of 2256 meters. If desired, you can climb the pedestrian path to its top. On the route you will be accompanied by a guide.

At the very top of the mountain, an observation deck is equipped, a magnificent view of the northern and southern coasts of the country opens from here, and in clear weather you can even see Cuba, which is adjacent to Jamaica.

Interesting: After climbing the mountain, you can go to the coffee plantation, where you will be treated to delicious local cuisine, rum punch and fresh coffee.
Back

Thing to do number 3: Have a Look at the Dunn’s River Falls 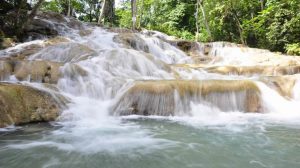 Dunn’s River Falls are located near the town of Ocho Rios, in the territory of the natural park of the same name. This is one of the most visited attractions of the island and one of the most picturesque waterfalls in the world. The total length of the cascades is 180 m, and the total height is 55 m, and the streams here form several small lagoons. Geologists call waterfalls of this type, like Dunns, a “living phenomenon”: water from underground sources is rich in calcium and by itself pours terraces in the stream. In addition, Dunn’s is one of the few limestone waterfalls in the world that falls directly into the sea. Passing the waterfalls, the river flows into the Caribbean Sea in the western part of a beautiful white sand beach.

The streams here flow down in cascades formed in limestone, and it is rather convenient to climb them upward – which is what everyone is doing.

Interesting: The best time to visit the waterfalls is morning, but there is no need to wait for peaceful reunion with nature: every year thousands of tourists come to Dunns Waterfalls.
Back

Thing to do number 4: Go to the National Black River Park 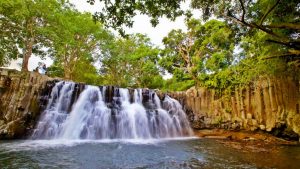 Black River National Park, located on the south coast of the island, is a favorite place of all Jamaica tourists. He is known for unique species of flora and fauna, the safety of which is carefully monitored by representatives of local authorities.

The park received its name due to the river flowing through it – the Black River, which is the largest in Jamaica. On both sides of it, there is a magnificent park area, where exciting excursions are held.

Interesting: It is worth remembering that in this area there are seasonal rains, so it is better to come here in the summer months – July-August, and in the period from December to April.
Back

Thing to do number 5: Spend Time Communicating with Dolphins in Dolphin Cove 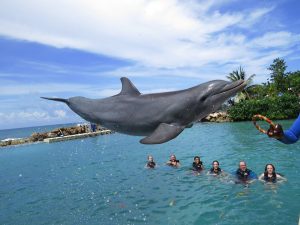 An amazing place for adults and children Dolphin Cove is a natural cove surrounded by 5 acres of lush rainforest. Here you can communicate with dolphins in their natural habitat. Visitors are invited to swim, stroke, feed these amazing creatures, and at the same time learn more not only about dolphins, but also about other representatives of the Carib marine fauna, including sharks. One of the most exciting entertainment is to try yourself as a dolphin trainer in a four-hour or eight-hour program.

A particularly popular is the “Dolphin Track”, diving in a special helmet with which you can walk along the bottom of the sea at a depth of 3.5 m surrounded by dolphins. For this unique attraction neither a diver’s certificate, nor any special experience is needed, and dolphins are happy to communicate and play with people in their familiar surroundings.

In Dolphin Cove, you can spend the whole day swimming with sharks, traveling through the jungle and exploring animals like:

Even trees and shrubs are not cut here to preserve the natural beauty as much as possible. The entrance ticket includes all kinds of entertainment: riding in mini-boats along the coast, snorkeling in the company of stingrays, kayaking on a glass-bottom boat, visiting shark shows and, of course, relaxing on a white sandy beach.

Interesting: There is also “Little Port Royal”, a replica of the most famous pirate base of Jamaica, where tourists can get lucky to find one or another gold coin. In addition, Dolphin Cove has a restaurant, coffee shop, souvenir and jewelry stores.
Back

Thing to do number 6: Go to the Port Royal 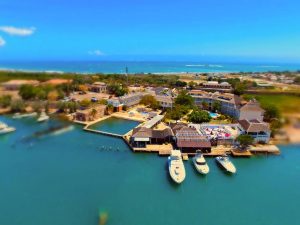 Once – “the richest and most vicious city in the world”, Port Royal in the 17th century was the capital of the English colony in Jamaica and one of the most famous pirate harbors. The most famous pirate who stayed here was Sir Henry Morgan, who attacked from here the Spanish ships sailing the Caribbean. Some facts about the city:

Today, the city is almost completely abandoned, and most of it is under water, at a depth of 15 m. The “Underwater City” of Port Royal is included in the UNESCO World Heritage List. In the late 1980s, a partnership was founded, the task of which was to revive Port Royal as a historic landmark. Many projects of thematic attractions were developed, which mainly remained at the project stage. Therefore, to this day Port Royal remains a very quiet and sleepy fishing village with a population of about 2 thousand people.

Interesting: Many “pirate” stories took place in Port Royal, in particular the adventures of Captain Blood and the movie Pirates of the Caribbean.
Back

Thing to do number 7: Visit the National Gallery of Jamaica 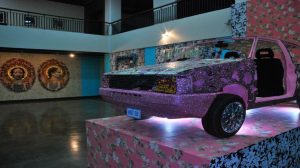 The National Gallery of Jamaica, opened in 1974, is located in the Roy-West Building of the city of Kingston and is considered the best on the island. At the entrance to the gallery is a curious sculpture “The Message”, depicting two whispering women.

Interesting: Also, in the gallery, you can see some of the surviving works of English and Spanish masters of the colonial era and the “controversial” statue of Bob Marley – Jamaica’s world-famous musician, who was moved here from the park because of the dislike of his fans.
Back

Thing to do number 8: Don’t Miss a Chance to Visit Montego Bay Resort 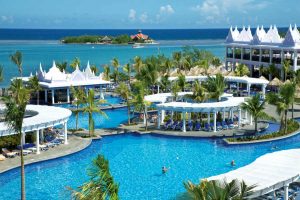 A corner of hotel luxury on the background of charming sandy beaches with glossy roofs of ancient mansions glittering in the sun is located just north of Kingston. In addition, Montego Bay, a fashionable Jamaican resort, is famous for the historic building of Fort Montego.

Nice to stroll around the Church of St. James, the old Cage Prison, the Burchell Memorial Church. Amazing expositions in the halls of local museums will give you pleasant coolness on a hot afternoon.

Little tourists will be delighted with the Marine Park, the underwater rides of the Park Moe Bay Andersi.

Interesting: Best beaches: Mosquito Cove, Cornwall, Doctor Cave. As for the saturation of nightlife, here it rolls over. A strip of noisy clubs, various restaurants will shake the last of you out of your hands.
Back

Thing to do number 9: Enjoy the Performance at the National Dance Theater 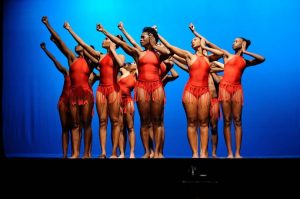 The National Dance Theater is located in the building of the Maly Theater, built by the Government of Jamaica with funds raised by street pantomime actors and donations from Kingston residents who have been collecting for many years. The theater, founded by Greta and Henry Fowler, opened its doors in September 1961 and has remained open to this day.

Interesting: More than 300 creative groups that contribute to the cultural life of Jamaica are performing in the theater.
Back

Thing to do number 10: Go to the Royal Botanical Garden 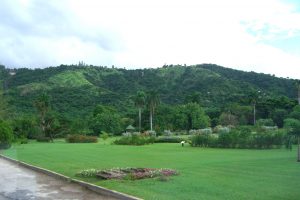 Royal Botanical Garden was founded in 1862 and is located at the junction of the road connecting Kingston and Annoto Bay. Kastelton has more than 4,000 species of plants brought from the great English garden at Kew.

At the present time, in the garden, you can:

Interesting: Located in the hills of St. Mary, the garden is a paradise for nature lovers – a cool, quiet place to relax. Also, visitors to the park will have a unique opportunity to purchase some flowers grown here.