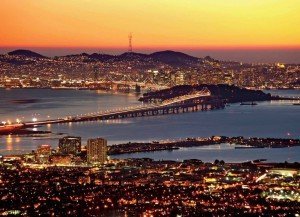 General portrait of San Francisco Bay Area attractions – a few popular tourist destinations near the ocean: the bridge “Golden Gate”, the prison Alcatraz, Angel Island and the old shipyard turned into a center of cultural life; magnificent museum of modern art, a tribute to nature – a spacious and well-kept park Union plus wine expanses of the Napa Valley on the road where you can taste the best American wines, and finally – an indispensable Chinatown (no less interesting than Los Angeles) and certificate turbulent modern history of the city – the area of Haight-Ashbury, the birthplace of the hippie movement. By the way, even public transportation deserves attention not only as a means of moving around the city – the historic cable cars regularly walk the streets since 1873.

Sightseeing infrastructure is very well-developed: public transport stops are located exactly near the attractions – so that in spite of the long distances in the city and not too convenient location, visiting museums and other sights is without too much physical effort. 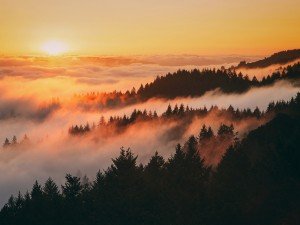 It is the highest point on the Marin Hills in Northern California. Its height is 784 meters above sea level. Since ancient times, Native Americans recognized this mountain as the sacred, which has healing power. This mountain is a unique energetic center of the Earth, an energy vortex in which the powerful energy of the universe permeates all levels of existence. Like every place it has its own purpose. What makes people contact with live energy of this mountain? There are several reasons why this place is popular:

There is an interesting legend of Miwok, the indigenous people of Northern California, where the mountain symbolizes the sleeping maiden Tamalpais, the beloved of the God Sun. On the way to heaven, earthly maiden slept in eternal sleep. God Sun tried to awaken her in vain: fog enveloped, the rain lamented. But he was disappointed in his attempts to revive the beauty and returned to heaven, where, to the surprise of the God, Tamalpais was waiting for him. And now their souls are together forever. Thus they became God and Goddess and help all lovers

find each other. It is in receipt of these possibilities there is a secret healing power of Mount Tamalpais. At the same time, which is the most pronounced healing energy of the mountains? Traditionally, the time of dreams, a special “dreaming” is the state of night time after sunset. This is the best time to visit this place.

Interesting: Mount is known for being able to free from all the conventions of society, allowing see the true you, your unlimited potential, the natural self-healing power. 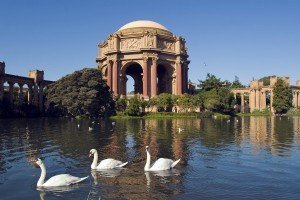 If you drive from downtown San Francisco to the bridge Golden Gate, you can see many interesting things, including the Palace of Fine Arts, which stands on the bank of an artificial pond, surrounded by a park. In San Francisco, it is considered one of the most beautiful monumental structures.

The Palace consists of:

And, it should be noted, the material from which they are aligned is not marble, but stone covered with plaster and painted in a mustard color. All this is surrounded by a magnificent park with alleys that offers a beautiful view of the bridge Golden Gate.

This peculiar architectural structure has a very interesting history. In 1915, there was an exhibition devoted to the opening of the Panama Canal. Under the exhibits a large piece of land has been allocated. In the center there was a pavilion in the form of huge towers of gems made hastily from improvised materials (plaster, cardboard, etc.).

Interesting: Initially it was a temporary building. But residents of the city loved the pavilion so much, which prevented its demolition and called it the palace. Some time later, there was built an exact replica using the more durable material. 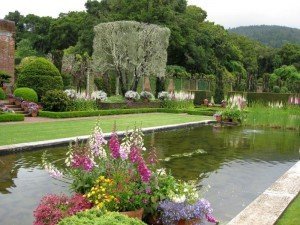 “Fight for the just cause. Love your neighbor. Live with dignity. “This was the motto of the Bourn family, who built 40 km from San Francisco’s beautiful house in 1916. However, the main attraction of the estate has become not a house with 43 rooms, but the magnificent park called Filoli Gardens.

The name of the garden Filoli originated from the beautiful acronym obtained from the first two letters of the words «Fight Love Life» – «reduced» motto of the Bourne family.

Six and a half hectares occupied by the fabulous floral gardens became the place where they filmed many Hollywood films, including the famous TV series “Dynasty.” Unfortunately, the Bourne couple themselves enjoyed the wonderful garden not for a long time. Within 20 years, one by one, they died, and the estate owner became the family having the shipping company in San Francisco.

New manor hostess – Mrs. William P. Roth not only fell in love with the garden, but did everything it became known in the whole America. Mrs Rott enthusiastically planted:

Bouquets, placed throughout the home, were kept up to date. By the way, even though in 1975 the mansion and gardens were donated to the State, bouquets of white roses, zinnias and flowering branches of pear still were changed once a week – according to tradition of the former mistress of the mansion.

If you love flowers and adore all beautiful, you should definitely visit this place.

Interesting: In summer, there are a lot of roses, which are worth seeing. However, the garden blooms all year round under the guidance of gardeners and their many assistants – volunteers and students. 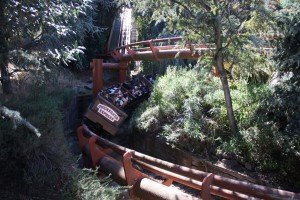 There is a great amusement park Gilroy Gardens Family Theme Park, which is very popular among tourists who come to have a rest with their families. In the evenings on the weekend you can see different exhibitions devoted to various cultures. For example, Lumination exhibition dedicated to Chinese history and culture is one of the most favorite among travelers.

Some of the sculptures reach a height of 6-storey building.

Here you won’t be bored as everyone will be able to find something to his taste. This refers to both adults and kids. There are a lot of opportunities to have a good time, among which there are shopping, rides, different educational programs for children.

Interesting: Also, live performances are held during the exhibition and there is the market, where on-site master will make handmade souvenirs for you. 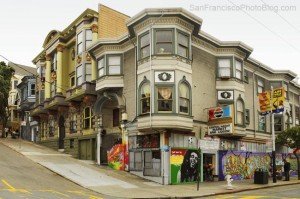 Nice area of San Francisco called Haight Ashbury made its history in 1967. That hot summer is known for gathering a hundred thousand hippies to celebrate the famous Summer of Love. It was then that the hippie ideology evolved from a subculture in a powerful motion proclaiming the core values of free love, creativity and non-material values. And the Haight-Ashbury received the honorary title of the place “where it all began.”

Today Haight-Ashbury is still full of life. It is energetic and boiling area of San Francisco. There are many places to visit:

Among the attractions of Haight-Ashbury – historic hotel The Red Victorian, settled down in the old mansion of carmine color and leading its history since 1904.

Interesting: There are houses typical for San Francisco of the late 19th century in the architectural style of «painted ladies». 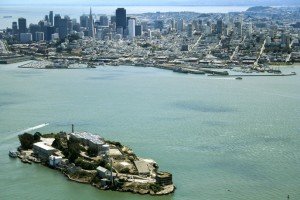 Alcatraz is a famous island in San Francisco Bay Area, California. The island also has another name – The Rock, which appeared after the film of Michael Beyya in 1996.

Alcatraz is in the top of favorite tourist attractions in the port city. Perhaps this place is so attractive due to its interesting but pretty grim stories. Alcatraz is never empty. Travelers from all over the globe come to the island to personally see the place, which they have seen in many films, television programs and read in books.

Some historical facts to keep in mind:

Thus, the name of the Island Alcatrazes was received by the neighboring island. Subsequently, according to the decision of the topographical service of the US Coast Guard, the name was shortened to the well-known to us today – Alcatraz. Thanks to its position the island was in the natural isolation. The icy water, the middle of the Gulf and strong sea currents have become those reasons that prompted the US Army to see Alcatraz from a new perspective. The location was ideal for the maintenance of prisoners of war, and from 1861 to 1898 their number increased up to 450 people.

Interesting: Today, the whole island is a museum. It is accessible by ferry from the pier at number thirty-three in San Francisco. Do not miss the chance to see the famous Alcatraz with your own eyes as here you will find much interesting. 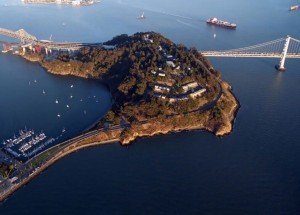 Yerba Buena is translated from Spanish “good grass”. So that’s one of the islands that are part of San Francisco. And this is the name of the largest arts center of this amazing city.

Consisting of two buildings and attracting tourists with the help of its dance, musical and theatrical performances, as well as numerous exhibitions of contemporary art lovers, the center of Yerba Buena is also interesting for business people.

Everyone will find something to his taste here:

The center was created in order to push the boundaries of our perception.

Interesting: The all-new, multifaceted, multicultural, stimulating contemporary art center is what Yerba Buena looks like. It strikes and impresses, therefore it is worth visiting. 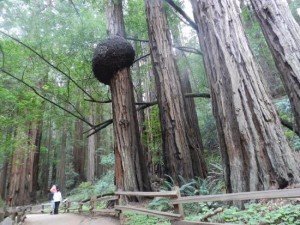 After visiting the Golden Gate Bridge, don’t forget to go 12 miles north to the Muir Woods with its giants. This destination is among the favorite among those who like hiking. There is no better relaxing place than this one.

Here you will see the oldest and tallest trees in the country, which are older than 1,000.

However, trees are not the only reason to come here as there is Cathedral Grove in memory of President Franklin D. Roosevelt. A lot of visitors come to enjoy educational exhibits. Here you will be able to see:

Interesting: There is no better recreational area to forget about the city fuss than Muir Woods in the Bay Area. 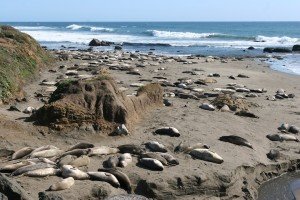 From December till March Ano Nuevo State Park is one of the best tourist destinations that is located between Half Moon Bay and Santa Cruz. Here a lot of people come to see cute elephant seals. You may be interested why exactly during this period of time? Thousands of elephant seals gather here exactly during winter season and you can observe them till the beginning of spring.

Why should you choose Ano Nuevo State Park as one of your destinations in the Bay Area? There are some reasons that make it worth visiting:

This place is a good destination for young naturalists and everyone who love animals and is fond of nature.

Interesting: You can take a hike across dunes and enjoy nature and watch how the elephant seals live. 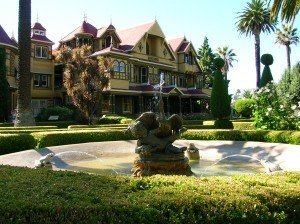 You must have heard about Winchester Mystery House as this Victorian mansion is really well-known. It was designed by Winchester Rifle heiress Sarah Winchester. The mansion was named after its designer. After he died his wife started the great project of construction in 1884. This project lasted really long till 1922.

Visitors like the name of this sight as it means there are some unexplained oddities connected with this building. The Winchester Mystery House is really popular among the tourists of the Bay Area. There are 160- modern rooms with:

People say that the ghost of the mistress is still there. The strange architecture for that period of time together with the mysterious ghost attracts a lot of visitors from all over the world.

You can have a tour, exploring the house, garage, greenhouse, stables.

Interesting: Come here on the 13th of Friday and enjoy the flashlight tour and check by your own whether there is anything mysterious there if not afraid of ghosts.