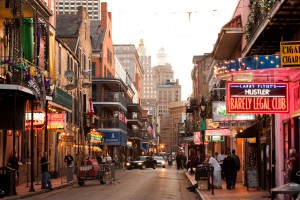 New Orleans is the birthplace of jazz and a lush jazz culture, unlike any other in North America. There is still an atmosphere of wealth and idleness diluted and supplemented by French grace, Creole, African American, Caribbean, Irish, Haitian, German and Vietnamese cultures.

Where is the best Creole food? Where is the best French Quarter? Where is the music, the abundance of alcohol, the architecture of the 18-19th centuries? Sure that all those things can be found in New Orleans! Each city of the US, in addition to its official name, has an additional name or name that corresponds to the “spirit” of the city. New Orleans has a few such names and this makes it the most unique city in America. Here there are some of the names: “City of the Crescent” – named because of the peculiarity of the Mississippi current through the city; “Hollywood South” – named because of the large number of films filmed in the city; “Big Easy” – called by musicians because of relative ease to find work; “A city that neglects caution” – named because of the external calmness and carelessness of the townspeople; “America’s Most Interesting City” – written on road signs in front of the city and inscriptions in the city limits.

This city, one of the most popular, old and large in the US, is in Louisiana, at the confluence of the Mississippi River into the Gulf of Mexico. In America it retains the reputation of a place for adults – not in the sense of debauchery, but in terms of the ability to mature assess its outstanding virtues. The city is bounded by Lake Pontchartrain in the north and the Gulf of Mexico in the east. 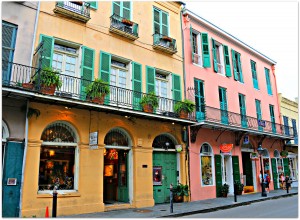 The French Quarter of New Orleans is the tourist magnet that attracts tourists from all over the world. The French Quarter of New Orleans, consisting of several streets in the center of the city, is known for its colonial architecture. Here there is a mixture of romance, jazz and black magic. In the old part of the city under the name “French Quarter” many ancient buildings have preserved. The cemetery of Saint-Louis is considered one of the oldest architectural monuments here. The history of the cemetery is shrouded in a lot of legends and legends. According to one of them, the voodoo queen Marie Lavaux was buried here. For St. Louis, not good fame was established. It is strongly recommended not to walk there alone. However, the cemetery is very popular during the celebration of Mardi Gras.

Every year in the quarter there is a colorful festival “Mardi Gras”, which is believed to have its origins back in 1743. New Orleans is famous throughout the world for its magnificent celebration – Mardi Gras, the carnival attracts people from all over the world who come here to enjoy the festivities. During the tour you can go behind the scenes of this holiday and see how famous dolls are made all over the world. Go to the hangars of Blaine Kern Studios, one of the leading manufacturers of large dolls in the world and actively participating in the Mardi Gras parade in New Orleans every year. Visitors will be able to see sculptural props, huge dolls, extravagant costumes and all kinds of figures.

During the “Mardi Gras” energetic New Orleans burns even more. Parades are held daily, starting from January until the beginning of Lent. And in a building called “Mardi Gras World” the carnival takes place during the whole year. This large structure, resembling a warehouse, is part of the studio of Blaine Kern, who is the famous local artist.

In the 1940s, young Blaine Kern for the first time publicly demonstrated his artistic skills, drawing a mural on the hospital wall as a partial payment on the bills of his sick mother. He was offered to work on the design of platforms that move during the carnival. After that, Kern became a very popular artist. Today, his projects are not limited to platforms for carnivals. Kern’s Studio produces some props items that are used in Disneyland and at film studios.

What to do if you have decided to spend your vacation in New Orleans and visited French Quarter? Tourists are offered to:

Interesting: “The World of Mardi Gras” is open seven days a week, except for the main public holidays.
Back 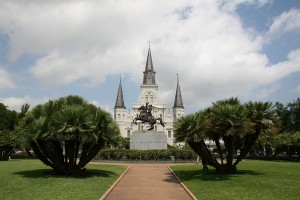 This is the most beautiful and popular place where artists and musicians gather since the early 1920s.

The project area was designed on the model of public places in Paris:

Interesting: On Decatur Street there are horse carriages, which willingly take passengers and drive them through the ancient streets with amazingly beautiful buildings in colonial style.
Back 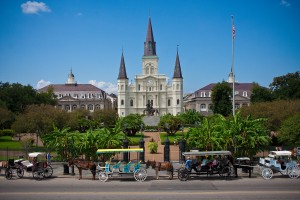 In the north-west of Jackson Square there is the Cathedral of Saint-Louis – a symbol and landmark of New Orleans.

It is the oldest functioning cathedral in the United States, built in honor of the French King Louis IX, who was canonized after his death. The first building was burned down in 1788, after which the cathedral was rebuilt for many years. Finally it was reconstructed in 1850. Today it is a real oasis of peace and tranquility.

The church is open to visitors if there are no funerals or weddings.

All tourists are impressed by the well-preserved stained glass windows and a rich altar in the Rococo style.

Interesting: Behind the cathedral on “Royal Street” there is an impressive marble statue of Christ that is definitely worth visiting as well.
Back 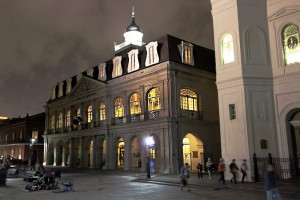 The Museum of Cabildo is very close to the Saint-Louis Cathedral. Cabildo Museum is a popular tourist destination due to the following interesting facts:

The construction was completed in 1799 in the era of the Spanish occupation. It was seriously damaged during the 1988 fire, but then it was rebuilt and reopened in 1994. Three floors reflect the history of New Orleans from the earliest times to the present time. In the museum, even the posthumous mask of Napoleon Bonaparte is kept. In the stone courtyard there are still guns of the era slavery.

If you read all the documents, then you can spend the whole day in Cabildo. A quick inspection of the exhibits will take from two to three hours.

Interesting: The museum regularly arranges special exhibitions devoted to a certain period of history.
Back 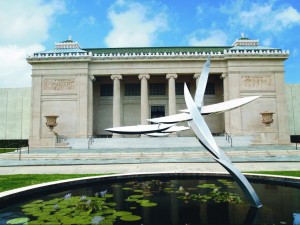 In the southern part of the City Park there is the building of the New Orleans Museum of Art, the museum is one of the best of its kind in the south. This is an ideal place to explore the artistic heritage of Louisiana. In addition to the beautiful collections of American and French artists, there are works of art and pre-Christian period.

The museum was presented to the city in 1911 by Isaac Delgado, an elderly owner of a sugar plantation. The building was repaired several times, but its main part remained unchanged.

The museum features masterpieces by Monet, Lorraine and Picasso. Special attention should be paid to the works of the French Impressionist Edgar Degas, who spent several months visiting relatives in New Orleans in 1870. On the second floor there is a portrait of Degas’ cousin.

The museum features masterpieces by Monet, Lorraine and Picasso, which can’t be found anywhere else. Special attention should be paid to the works of the French Impressionist Edgar Degas, whose works of art present a comprehensive overview of French art. Edgar Degas lived with his mother’s family in New Orleans between 1871 and 1872. On the second floor there is a portrait of Degas’ cousin.

Interesting: The permanent exposition of the museum represents more than 40,000 works of art, from the Italian Renaissance to the modern era.
Back 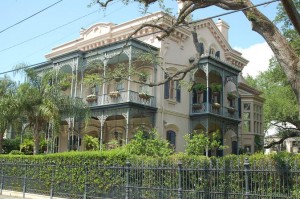 One of the greenest and most beautiful areas in New Orleans was built on the former plantations. When the plantations were divided, large and expensive houses were built on the plots, surrounded by magnificent gardens.

This is a veritable labyrinth of:

The layout of the area was designed by the French architect Barthelemy Lafon. A lot of buildings and cottages have remained intact. In the 1830s, the so-called “Greek” construction period began in the district. A lot of streets have since been named after the Greek Muses.

On the Eighth Street there is the George Washington Cable House, which played a major role in the history of the state. He was a writer and told about the life of Creoles in his works.

The garden area always welcomes guests. There are many shops in which you can find souvenirs and real antique things.

Interesting: In October, before Halloween in the Garden District there is a masquerade Zombifest, a carnival in New Orleans, and in July – an annual contest of cooks.
Back 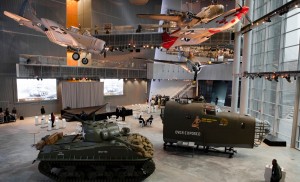 The museum was founded in 2000. It is supported by the Smithsonian Institution.

Interesting: The National Museum of the Second World War was appointed by the US Congress as the official museum of America on the theme of World War II.
Back 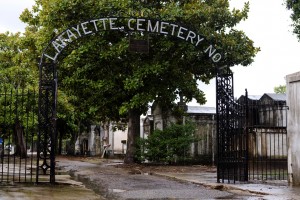 The Christian cemetery of Lafayette is a place of comfort for the inhabitants of the city since 1833.

Some facts about the Lafayette Cemetery:

It’s no wonder that the author of Gothic fiction Ann Rice used this cemetery as a place of action in several of her novels.

Undoubtedly, the inspection of the cemeteries of Lafayette and St. Louis is suitable for fans of extreme especially taking into account that some graves and monuments settle down and can drown right in front of your eyes, while others are replaced by the roots of old trees, which makes a terrible impression. No wonder such footage appeared in the films “Interview with a Vampire” and “Double Miscalculation.”

For courageous visitors, the Lafayette Cemetery is open every day except Sundays. If you still have an appetite after a walk through the cemetery, you can go to the popular restaurant “Commander’s Palace”, which is very near. Right next to the cemetery there is a tram stop.

Interesting: Many visitors to the cemetery report ghostly figures, cold touches and a strange creak that sometimes appears among the graves.
Back 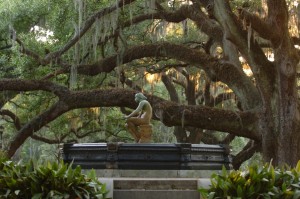 The City Park of New Orleans covers more than 1300 hectares and contains many curious tourist attractions, including:

The City Park is a great place to visit when you have a family holiday. Of particular interest to children there are the following places:

Also in the park there are tennis courts and an 18-hole golf field.

Interesting: The highlight of the park is an oak grove in which some trees are over 800 years old.
Back 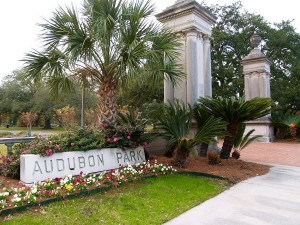 This park is located in the historic upper part of New Orleans. It looks like a beautiful oasis where you can have a rest and enjoy a lot of different activities. One of them is golf tournaments. However, the main attraction of this place is for sure Audubon Zoo.

Audubon Zoo is a part of the Audubon Nature Institute. About 2000 animals have found their home here. The zoo was named after the naturalist John James Audubon who lived in New Orleans. In this stunning zoo you will find animals from all over the world.

It is worthwhile to come here with the whole family together with the children.

How to spend time in Audubon Zoo?

Interesting: Here you can explore Aquarium and Insectarium.
Back