Home
>
Places
>
10+ Most Interesting Things to Do in Aruba
The following two tabs change content below. 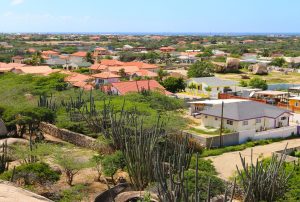 The formula for the popularity of the Caribbean island-state of Aruba is simple, but no less effective: good sandy beaches, clear coastal waters, great entertainment opportunities (at the level of Cancun), educational excursions, and shopping. Tourists of all ages come here. Many of them are travelers who, step by step, discover more and more new faces of the Caribbean islands.

Thing to do number 1: Go to the Arikok National Park 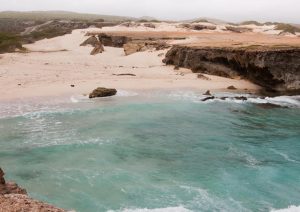 In the southern Caribbean, not far from Venezuela, there is the small island of Aruba, which is one of the Lesser Antilles. The area of ​​the island is 193 square km, it inhabits a little more than 100 thousand people. This public entity is part of the Kingdom of the Netherlands as a subject of the Federation. The capital of Aruba is Oranjestad.
18% of the island’s territory is occupied by the famous Arikok National Park – a conservation zone between the Yamanota Upland (188 m) and Arikok Hill (176 m), which block the park from northeast winds. Due to this, and also due to the soil rich in mineral substances, this area has a rich flora and fauna. Some species of animals and plants live only in this area. Several species of snakes, as well as birds (one of the species of owls and parrots) can be found only in the reserve. Divi-divi trees, Quihi, various types of aloe, cacti, and tropical flowers grow here.
Arikok Park is also interesting for its historical monuments, such as:

Interesting: In one of the caves – Fontaine, petroglyphs left by Arawak Indians were found. There are other caves in the park: Guadiric and Hulib “Tunnel of Love”.
Back

Thing to do number 2: California Lighthouse In the northwestern part of the island, on a hill called Hudishibana, a white stone lighthouse rises 30 meters high. The California lighthouse got its name in memory of the California ship, which crashed in these places in 1891. The ship sailed from England to Central America, carrying passengers and goods for sale. During the wreck, the crew threw most of the goods overboard to lighten the ship. The locals picked them up, dried them and sold them for a long time at the local market in Oranjestad. As they say, there would be no happiness, but misfortune helped.

Interesting: People come here to enjoy the views of the west coast of Aruba, which are especially beautiful in the rays of the setting sun.
Back

Thing to do number 3: Have a Look at the Ayo Rock Formation 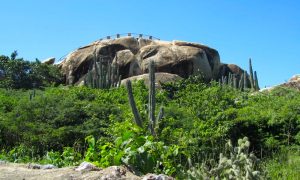 Aruba is a beautiful, unusual, full of amazing surprises, island in the Caribbean. Resting here is not only pleasant, but also amazingly interesting. The main mystery of Aruba in the general opinion can safely be called the Ayo Rock area.

After all, at first the Antilles were called Islas de los Gigantes (Spanish), “the islands of the Giants,” because the local population significantly exceeded the size of the Spanish sailors.

Interesting: Are these giants placed stones in circles, or is it a fad of nature, which sometimes works wonders that we cannot even imagine? To find your answer to this question, you need to go to Aruba and see everything with your own eyes.
Back 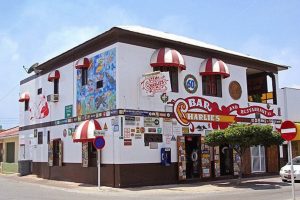 Locals say about Charlie’s bar-restaurant: “If you haven’t been to Charlie’s, you don’t know Aruba!” The bar has been open to visitors since 1941 and today this place is to the liking of both ordinary residents and well-known people – artists, politicians, and even royals. Among the latter, it even has its patrons.

In 1977, the Queen of Holland awarded Charles Browns Sr. the “Order of the House of Orange” (which means a kind of knighting) for his help during World War II and his many years of contribution to the development of a food culture.

Bar Charlie’s stands on the very shore of the Caribbean Sea, 30 meters from the place where sailors usually go ashore. This ensures a steady flow of customers. The atmosphere of the bar is created from a wide variety of objects of various styles and directions:

The bar has its own mini-hotel with several rooms, ready to shelter those who prefer a quiet relaxing holiday away from the bustle of the city. Today, Bar Charlie’s is recognized as one of the ten best bars in the Caribbean.

Interesting: Here are the best dishes of intercontinental cuisine: everything from giant shrimp to steaks and fillets, fresh seafood, a wide selection of snacks at your disposal. The menu is very diverse and is prepared every day.
Back

Thing to do number 5: Have a Great Time at the Hadikurari Beach 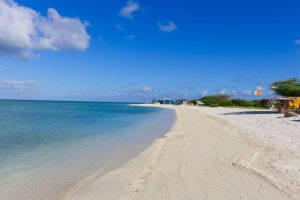 This beach is located on the northwestern edge of Aruba Island, close to the Marriot Aruba Hotel and Casino Stellaris. Here, you will find many small thatched-roofed huts, which gave the name to the beach – Hadikurari Beach – Fisherman’s Hut.

Like all Aruba beaches, this beach is absolutely open to everyone at any time of the year. There are always a lot of people here, but at the beginning of July it is especially crowded because at this time the windsurfing tournament takes place here.

Interesting: From the restaurant’s open terrace, you can admire the beach itself and beautiful views of the ocean and windsurfers soaring above the waves.
Back

Thing to do number 6: Go to Iguana Beach 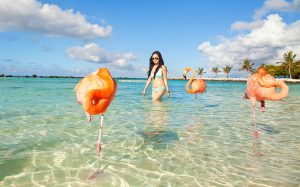 Iguana Beach is one of two beaches on the private Renaissance island, located in the Caribbean Sea off the west coast of Aruba south of Oranjestad. The island is a narrow and very elongated strip of land. It belongs to the resort of the same name. The beach is located in the northwestern part of the island opposite the runway of Queen Beatrix International Airport.

Interesting: The beach got its name from a dozen iguanas that live on it the size of a human hand.
Back

Thing to do number 7: Go to the Renaissance Beach Renaissance Beach is a beach in the western part of Oranjestad, the administrative center and the largest city of Aruba. The beach belongs to the hotel of the same name and has a high degree of comfort for vacationers.

In front of the Renaissance Beach, there is a private island owned by the hotel. You can get here in 7-8 minutes using a water taxi. The beaches are equipped here both for family vacations and exclusively for the adult audience.

Interesting: From the north-east side, a wonderful park named after Queen Wilhelmina adjoins directly to the beach. This is four and a half acres of beautifully manicured land with green lawns, flowering shrubs, with mighty trees, whose crowns save their shadow from the heat.
Back

Thing to do number 8: Go to the Alto Vista Chapel 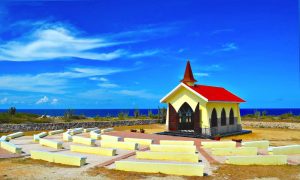 Alto Vista Chapel is a small Catholic temple, also known as the Pilgrim Church. It stands on a hill, 8 km northeast of the city of Nord. The church is painted on the outside in a very bright yellow color and is visible from afar.

The Alto Vista Chapel was built in 1952 on the site of the Catholic Church, founded in 1750 by missionary Domingo Antonio Silvestre from Santa Ana de Coro, Venezuela. The territory where the chapel is located is considered the very place where the conversion of the Aruba Indians to Christianity began, here the village was founded by missionaries.  Some facts about Alto Vista Chapel:

Interesting: The building does not have any stained-glass windows, but an altar with a statue of the Virgin Mary and a very calm atmosphere favor prayer. The border of the old chapel is marked with stones, several graves have also been preserved, among them the burial places of Domingo Antonio Sylvestre and Miguel Enrique Albares.
Back

Thing to do number 9: Have a Look at the Ruins of the Gold Field 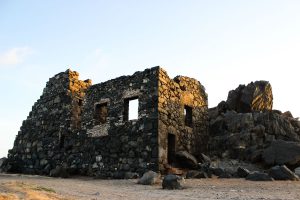 The history of the island is divided into two periods: before colonization and after it. Until the Europeans suspected the existence of Aruba, the island lived its harmonious life. The indigenous population of the island was Arawak Indians, who were tall, significantly superior to the growth of Spanish sailors. However, after the arrival of the white man, the Arawakians were taken out for hard work, from which they died as a whole tribe, leaving the island uninhabited.

Interesting: But the ruins of the gold mine in Miralamar have survived to this day, and therefore we can see with our own eyes what was here almost 2 centuries ago.
Back

Thing to do number 10: Go to See Yamanote Mountain 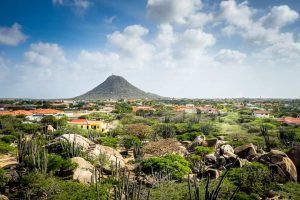 Yamanote is a mountain on the south coast of the island of Aruba – one of the most picturesque and curious islands in the Caribbean. Mount Yamanote owns a local absolute altitude record of 188 meters above sea level. The mountain is located on the territory of the Arikok nature reserve.

Interesting: Yamanote, as a natural barrier to the winds, is not only one of the factors that allows the plants and animals that inhabit the island to survive and develop, but it is also a habitat for many of them. In particular, donkeys and wild goats live on its slopes, often, here, you can also find Aruba parrots.
Back

Thing to do number 11: See the Most Famous Aruba’s Chapel-the Lourdes Grotto Chapel 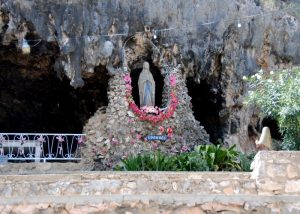 The Lourdes Grotto Chapel is located near San Nicholas, which is located in the southern region of Aruba. Local residents in honor of the 150th anniversary of the first appearance of the Virgin in the city of Lourdes (France) carved a grotto in the rock, where they placed a statue of St. Mary. The statue weighed approximately 700 kg. Some interesting facts from the history of this place:

Interesting: If you find yourself next to the statue of the Virgin, then next to you will see a small statue of Bernadette, kneeling and praying in front of the Blessed Virgin Mary. The Chapel of the Grotto of Lourdes is a beautiful and quiet place that must be visited. Its healing power is certainly much less than that of the Grotto in Lourdes, where Bernadette the Virgin was, but it is rightfully one of the most striking symbols of respect for the Blessed Virgin Mary on the island of Aruba.
Back